As executive director at Wellfield, I’m often asked about the progress being made on construction projects large and small, our future plans, or what exciting new events are around the corner. While all of our projects are special, I’ll admit I’m captivated by the process and progress as work continues on our beautiful Island Garden, a gift from Don and Jurate Krabill. As we develop our Japanese-style garden, we’re learning more and more about the intricacies of its design from its mastermind and renowned Japanese Garden designer, Sadafumi Uchiyama. On his November 2018 visit to Wellfield from Portland, Oregon (where he is Curator at the world-famous Portland Japanese Garden), ‘Sada’ solved Wellfield’s ongoing dilemma regarding use of a 16,000 pound slab of stone that’s been parked just north of the Island Garden for several years, waiting for its turn in our space. The slab was purchased for an earlier iteration of the Island Garden, under a previous draft of the design before Sada became involved in the project. Sada’s expertise determined the stone to be too large and massive for use in the garden, proper. But its 8-ton magnificence couldn’t escape Sada’s creative eye, as well as his respect for the stone which had been forming for millions of years and traveled a great distance – requiring tremendous resources – to come to Wellfield. His solution: use it as a foot bridge to connect the Island Garden to the adjacent Elk Garden on the island’s south end. Make it part of the ‘wow factor’ as you enter this new, amazing space!

For nearly three years since he took over the project’s design, Sada has struggled with the Island Garden’s southern ‘guest entry experience’, which had been predetermined by the existing ‘Trellis Bridge’, a beautiful wooden bridge handcrafted from local materials by Eggink Construction along with support from Bruce Gowdy (whose handywork can also be seen in various garden locations, including the gorgeous new sales desk at the Visitors Cottage).

Sada had always believed the Island Garden’s primary entry from the south appeared obstructed and constrained as the taller wooden bridge blocked viewing angles and simply did not ‘fit’ with the overall aesthetic of our Japanese-style garden. During a subsequent planning meeting Sada sketched this simple image to convey his vision: 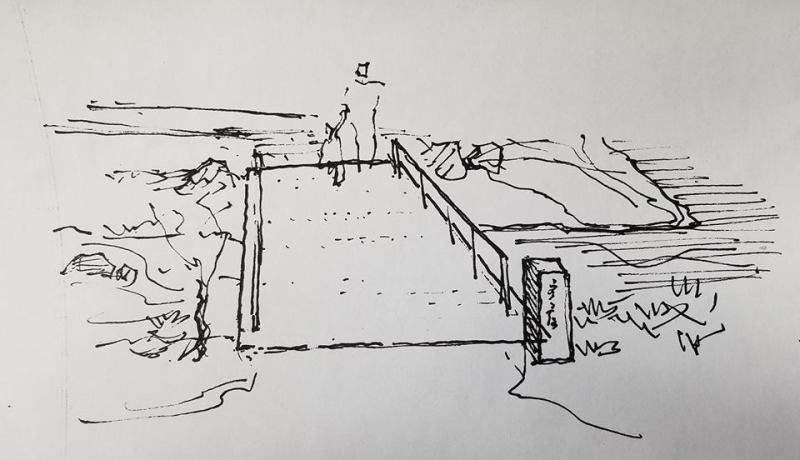 He insisted that it remain simple, with a smaller stone monument marking its entry. Following a Building and Grounds Committee recommendation to the Board of Directors, the change was approved and plans began for the disassembly of the Trellis Bridge by the Egginks and relocation of the 16,000 pound slab to its new home by Gabe Gratzol of Rustic Rocks. Once the Trellis Bridge was deconstructed and stowed for future use (that’s another story soon to be told!), Building and Grounds Committee Chair and former executive director Eric Amt, Gratzol, and a couple of very large machines began the arduous move and installation. On a cold December afternoon, the slab was lowered into place by a large excavator – – if you missed the video (5:38) on Facebook, CLICK HERE to view. Handsome bronze railings will be added for safety, stone pavers will be fitted to join the surfaces, and the open and airy entry experience will be completed when the Island Garden opens this fall!

So back to my original question that may have enticed you to click: “Do you know your hashi from a hole in the ground?” In this case, a ‘hashi’ can literally be the one thing keeping you from falling IN-TO a hole in the ground – – it means “bridge” in Japanese. And when the word “hashi” is used after other words, the word form “-bashi” is often used. Hence, the Japanese term for a stone bridge is ishi-bashi. We now have a magnificent ishi-bashi! This should not be confused with our gorgous Japanese arched bridge, pictured here on the north end of the Island Garden, which is called a sori-bashi (the Japanese word for “arch” is sori).

Now that you know a hashi from a hole in the ground, follow our progress on the Island Garden as you visit in person throughout the year with your membership, or like and follow us on social media. The Island Garden will open this fall, with the grand opening celebration continuing into 2020 as we bring you a year of Japanese Garden and Japanese culture-themed activities, opportunities, and surprises. GROW with us!

See you at the Gardens.

This entry was posted in EDUCATION, Latest News, MEMBERSHIP, Notes from the Director, PHOTOS, PLAN YOUR VISIT, THE GARDENS. Bookmark the permalink.

Taste of the Gardens